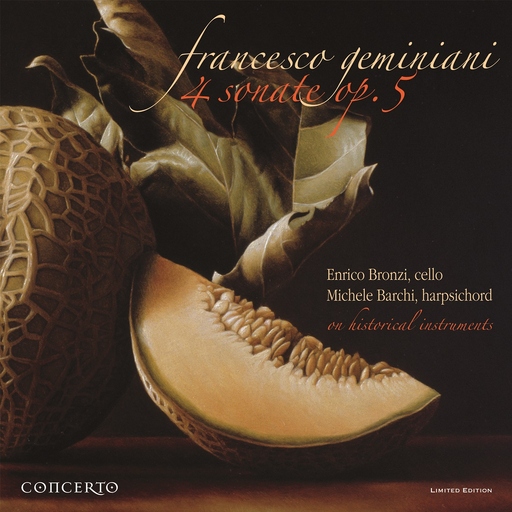 Titel
4 Sonate for cello and basso continuo op.5
Interpret
FRANCESCO GREMINIANI
Label
Concerto Classics
VÖ Datum
11.01.2019
Genre
Klassik
Artikelnummer
LP2029
EAN
8012665202912
Beschreibung
Concerto is inaugurating a series of vinyls, right with this recording of Francesco Geminiani’s first 4 Sonatas for Cello and basso
continuo Op. 5, a recording that was recently published in compact disc.
The record has been produced at the end of April according to the very highest standards of quality, both in terms of the lacquer
density and in terms of data transfer from the original master thanks to the work of the studio, Elettroformati in Milan, one of
the few companies in Europe still working on vinyl records. An original Neumann record lathe was used to this purpose under the
watchful eyes of the label’s manager and sound technicians, all more than a bit excited.
For at least three generations vinyl records represented the first, unforgettable encounter with the fruition of music; for those who
are younger, vinyl records belong to discotheques and the world of DJs. For some ardent fans of hi-fi music, they are still considered
the vehicle of choice, unequalled for audio quality.
This album is a collectors’ item: presenting one of the finest performances by Enrico Bronzi, produced in a limited edition with each
copy numbered and personally autographed by Bronzi.
The continuo part is performed by Michele Barchi, following the performance practice existing at the time, handling the figured
bass line masterfully by reinventing and recreating the images and emotions of that period with exquisite polish. Barchi has been a
member of well-known musical formations such as the Giardino Armonico. Together with the violinist Elisa Citterio he founded the
Baroque music group Brixia Musicalis and as harpsichordist appears in concert, performing both as soloist and in chamber music
groups.
This performance took place in the splendid dance hall at the Castello di San Lorenzo de Picenardi in the province of Cremona
(northern Italy).
All of these aspects - the use of historic instruments, the vinyl recording, the splendid location, the autographed copies -