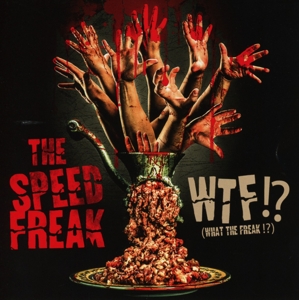 Title
wtf?!
Interpret
the speed freak
Label
psychik genocide
Release Date
27.03.2015
Genre
Hardcore Techno
Article Number
pkgcd72
EAN
3516628238925
Description
The Speed Freak is an iconic artist who participated in the creation of the electronic scene at its very beginnings in Germany. Both pioneer and forerunner of the hardcore genre, this artist wears many hats. As early as 1994, after a few successful explorations in EBM Techno under the label Force Inc, and along side the likes of Alec Empire among others, hestarted making a move toward the harder side of the electronic scene by joining legendary labels like Gabber and Hardcore: Mokumand Shockwave-labels that mark edageneration.
An unparalleled DJ and avant-garde composer, his discography, which incorporates 280 references-all styles, all formats-is really impressive. You can besure that over the last 20 years, all the DJs have had The Speed Freak in their collection. Many of his tracks have been compiled worldwide, and he has won two gold records for his remixes, ?PartyAnimals? from I Want to be a Hippy and ?KnockinÉ?from Double Vision(250,000copies sold in Germany).
The Speed Freak, a very productive artist, has also been recognized for the versatility of his compositions. He has tried his hand at many facet sofel ectronic music (acid, breakcore, drum&bass, happy gabber, techno, dubbytriphop, etc.)and under many different pseudonyms (Biochip C, Biobreaks ,Search&Destroy, etc.).
A worldwide reference in the field, he has toured both live and as a DJ around the globe with artists as prestigious asProdigy ,Westbam ,CarlCox ,LennyDee ,MarcAcardipane ,etc.He has performed in Japan, in the USA (5xinChicago,2xinNewYork,7xinLosAngeles,and2xinMilwaukee), inCanada, in Australia, and in Europe (Switzerland, Austria, France, Spain, England, Scotland, Holland, EasternEurope, etc.)as well as continuing toplay at the major hard festival ,EDM. ..