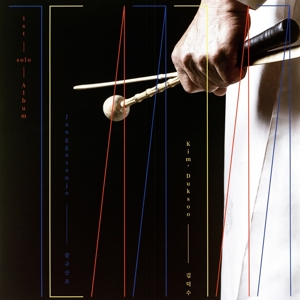 Title
Janggusanjo LP
Interpret
Kim, Duksoo
Label
Production Gogeum
Release Date
14.06.2019
Genre
Klassik
Article Number
GL-0003
EAN
8809607640068
Description
"Kim, Duksoo’s Janggu Sanjo 'Sanjo (??)'; refers to a freestyle solo in a traditional Korean instrumental. Since the Gayageum Sanjo was founded by Kim Changjo in the 19th century, it has been evolving until today. Songs start slowly but steadily build up to faster tempos, which is a method known as gigyeonggyeolhae (????: from the beginning to highlight, pause, and release), and the musicians'; individual creativity, spontaneity, and dynamism play important parts in the genre. As musical instruction changed from master to apprentice based on gujeonsimsu (teaching with words and learning by heart) to classes in institutional organizations with the use of scores, structural aesthetics, rather than spontaneity, has become more emphasized. In addition, with the new concept of the intangible cultural asset, this genre became music to be enjoyed genealogically. In Sanjo, the Janggu has played an important role as a sophisticated and diverse accompanying instrument that uniquely harmonizes with the Gayageum, Geomungo, Daeguem, Piri, Haegeum, and Ajeng. Some argue that this is why Janggu has not been able to become a solo instrument.
However, Kim, Duksoo discovered the possibility and potential of the Janggu as a solo instrument. Furthermore, because Sanjo is an instrumental solo, he thought that it should expand and develop with the spontaneity and dynamism of the traditional Korean rhythm. Kim’s first solo instrument album 'Janggu Sanjo'; is the focal point of this view.
The songs in the album can be divided into two main categories. One is shamanic rhythm, and the other is Nongak (farmer’s music) rhythm. In the case of the songs of the shamanic rhythm, the melody of Gyeonggido Danggut (Tutelary Rite) and Jindo Sitgimgut (Cleansing Rite) are at the center of the songs. The Nongak melody of Gyeonggi, Yeongnam, and Honam are at the center of the songs of the Nongak rhythm. However, the songs do not follow the conventional flow of Sanjo, from a slow to a fast rhythm. The emp